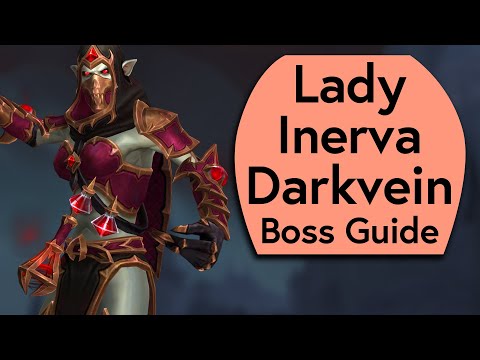 Stick Figure Raider Merch because sure why not https://teespring.com/stores/hazelnuttygames

The key to Lady Inerva Darkvein is to stay on top of emptying Anima Containers without totally overwhelming the healers with raid damage. As the various jars get past 33 and 66% Anima, more modifications will be unlocked for their respective ability.

Orb Jar (officially the Container of Sin) is connected to the Sins and Suffering orb threading mechanic. The three players connected by Suffering beams need to thread them through every Sin orb at once to make them despawn. Other players should avoid the beams. The first upgrade connects the Sin orbs with damaging beams of their own, and the second upgrade makes the Sin beams rotate.

Add Jar (officially the Container of Concentrated Anima) is connected to the Concentrated Anima adds. Players targeted with the DoT should move near melee but not on top of players for their explosions. Stationary adds will spawn, the large one needs to be tanked and has a swap worthy debuff. Interrupt and kill the smaller adds, kill the larger one. The first upgrade makes targets of the DoT rooted, so they should remain near melee at all times unless soaking. The second upgrade causes shadow fragments to fly out from the DoT targets on expiration, which the raid needs to dodge.

Catch a live stream from me on Twitch! https://www.twitch.tv/hazelnuttygames

Support my channel on Patreon! http://www.patreon.com/hazelnuttygames