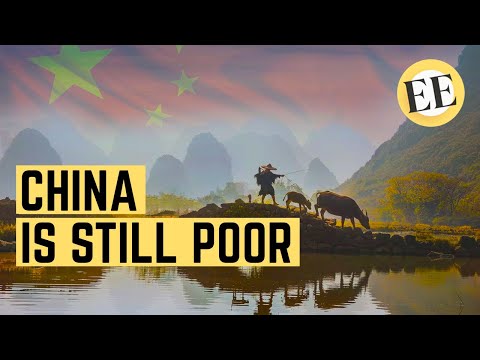 This video was made possible by our Patreon community! ❤️
See new videos early, participate in exclusive Q&As, and more!
➡️ https://www.patreon.com/EconomicsExplained

Whenever we see china in the news it’s normally for some impressive statistic about building stuff, or how it is now home to the most millionaires in the world, or maybe it’s even an article about whatever geopolitical tomfoolery they are trying to pull this week.

But what is often forgotten about this is that behind the somewhat intimidating outward appearance of economic might and glistening skyscrapers, china is an extremely poor country.

This almost sounds a bit paradoxical given the wealth that is so evident from the outside. Never the less average incomes in China are still less than $15,000 USD’s per year, and that’s average, so in a nation that reports a Gini coefficient of 0.47 with some independent research noting this could be as high as 0.73 that means there are a lot of poor people at home in this economic miracle.

In plain English, this means upwards of half a billion people in China are living on less than $10 per day, primarily made up of those still living in rural areas.

Now this fact is not lost on the Chinese government, who know that a growing wealth divide in their worker’s paradise is not a great look, especially if that divide is between the cities fueling growth and the farmers feeding them.

That is why in just the last 5 years the government has poured the equivalent of over 800 billion dollars into aid in area’s where extreme poverty is still commonplace. This is to say nothing on state-owned enterprises which easily bring this running total to over a trillion dollars in the same time period.

A trillion dollars in 5 years, that’s more than the entire GDP of 3 quarters of the world’s countries, on one single welfare project.

Even for a government as wealthy as China’s, this is ultimately not sustainable.

So a new solution was needed to make these systems more efficient at solving core issues rather than alleviating the symptoms with handfuls of cash.

And there might be a lot to take away from what they have done so as always we need to understand a few things.

How much poverty is there actually left in china?

Why is this so difficult to measure?

Why does China care so much?

And how might cows be the solution to this whole problem?

🎧 Listen to EE on Spotify! 👉 https://anchor.fm/EconomicsExplained

ECONOMICS EXPLAINED IS MADE POSSIBLE BY OUR PATREON COMMUNITY 👊🙏
Support EE by becoming a Patron today! 👉 https://www.patreon.com/EconomicsExplained

The video you’re watching right now would not exist without the monthly support provided by our generous Patrons:

How China is Fighting Poverty With… Cows?