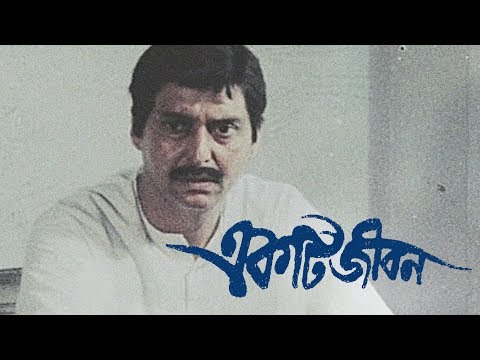 Chalchitra presents & in association with NFDC: ”Ekti Jiban” was released in 1987.

“Ekti Jiban” is based on a Bengali short story by Buddhadeva Bose (which was based on a true story itself).

The story is about a poor school teacher Gurudas Bhattacharya (Soumitra Chatterjee) and his family. His dream is to compose a new self-contained Bengali dictionary, but the job seems to be rather elusive and impossible owing to his financial crisis and scarcity of resources. The project became his passion and he dedicated his entire life in the compilation and composition of that dictionary. This saga of an one-man mission is superbly and sensitively directed by Raja Mitra.

Satyajit Ray was initially interested to make this movie, but due to various reasons couldn’t make that happen. Later, my father (Raja Mitra) went to Mr Ray and expressed his willingness to direct Ekti Jiban. Ray encouraged Baba a great deal. Satyajit Ray’s behind-the-scene contribution for making this movie was immense in every sense.